I promised that we’re going to build a distributed system in bash, but the mutex that we’ve written in the last part is still pretty far way from that goal. This time, let’s build something more tangible: a queue!

A queue is a data structure for storing data in a first-in-first-out fashion. That means, when you take items from the queue, you get them in the same order that you put them into the queue. Exactly what we need for a message exchange. And the mutex from the last time will help us make the queues thread-safe1, so that multiple processes may put data into and take data from the queue at the same time without race conditions.

Let’s start with an naive approach. The queue has a list to store data items (one per line) and a counter that counts the data items in the queue. For thread-safety, both are protected by the same mutex. A producer will append data to the queue in four steps:

Similarly, consumers will take data from the queue in these four steps:

This works, but there is a big problem (as you probably guessed, since I called this the naive approach). Imagine there is one consumer and no producer, and the function used to take a data item looks something like the following.

Because there is nobody else locking the queue, the consumer will never wait in queue_lock() and the loop becomes a tight loop, leaving one of your CPU cores running at 100%. But this problem doesn’t just occur with only one consumer. Even if you have more than one consumer. One consumer will always be executing the loop (it may not always be the same one though), and you will always have one CPU core running at full blast. Instead of wasting energy like it’s 1970, let’s find a way to put consumers to sleep when there is nothing for them to read.

An awful analogy: the semaphore

This is where another synchronization primitive enters the stage: the semaphore. In real life, a semaphore is a signal for trains. The kind that has an arm that moves up and down to signal whether the train may pass to the next track segment. The only thing that railroad semaphores and computing semaphores have in common is the name, so don’t make too much of it. While a normal mutex allows only one process at a time to proceed, a semaphore may allow multiple processes to proceed. Railroad semaphores don’t do that, at least not without making the evening news.

Instead, think of a semaphore as a thread-safe counter with two atomic operations:

This is what the petri net for a semaphore looks like:

The consumer, starting at the top left, will not be able to proceed until a token has been added to the semaphore. Tokens are added by the producer using sem_post() (the reason I drew the producer upside-down is that the petri net for the queue is symmetrical if you draw it this way).

How does that help us with our queue? Instead of storing the number of data items in a counter, we will use a semaphore as counter.

The entire queue ends up looking something like the following. 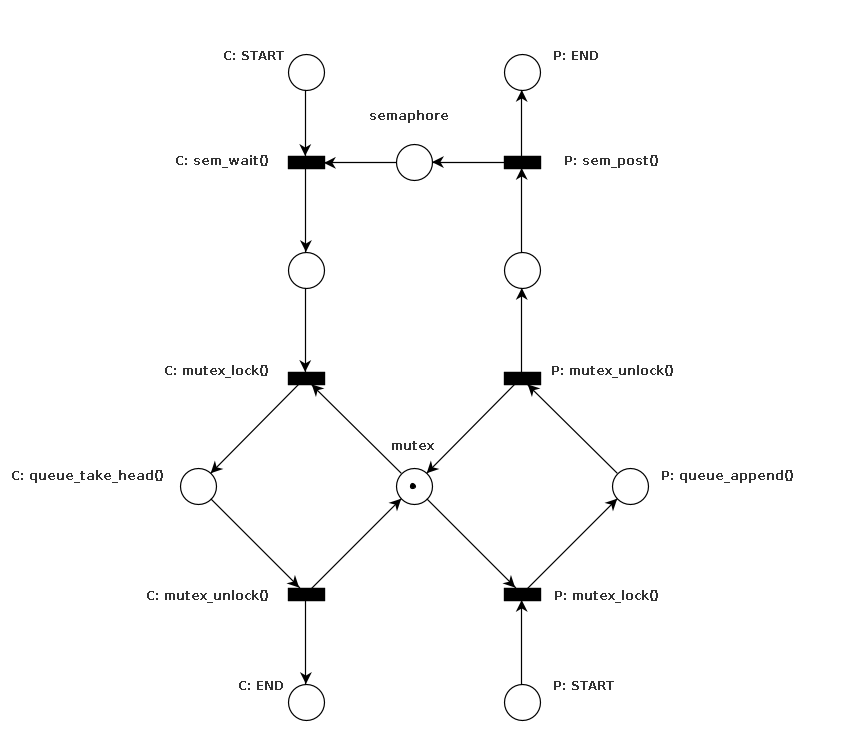 Places prefixed with C belong to the consumer (i.e.queue_get()), places prefixed with P belong to the producer (i.e.queue_put()). I have left the two places between the semaphore and the mutex unlabelled because neither the consumer nor the producer will execute anything in those places. Nevertheless, they might be interrupted between the semaphore and mutex operations, so the state is necessary (also, it’s not allowed to directly connect two transitions).

Getting data from the queue: queue_get()

Thanks to the semaphore, we can write queue_get() without of any loops! Okay, you might argue that’s because the looping happens in sem_wait() now, but let’s not split hairs2. I also added some error checking, because no code is complete without error checking.

Because sem_wait() suspends the caller until the counter is larger than 0, and because it will let only as many processes proceed as there are data items in the queue, we don’t have to check any counters. All we have to do is lock the mutex to make sure we don’t read from the queue at the same time as any of the other processes that were let through the semaphore.

Putting data in the queue: queue_put()

Earlier, I pointed out the symmetry of the queue’s petri net. That was not just for aesthetic purposes (that’s not to say aesthetics aren’t important), but it tells us something important about the two functions. First, neither of them have any loops or branches (but we know that already). Second, we can tell that queue_put() has to call mutex_lock(), mutex_unlock(), and sem_post(), in this order. This is what it looks like:

Fun fact: The shell has structs

At this point you are hopefully wondering about the value of the queue argument that is passed to the functions. If this were C, the queue argument would be something like struct queue *queue, but since the shell does not have a notion of structs, and because shell variables can’t be shared between processes, we have to use something that we can share with other processes: file system objects.

This also answers the question, what exactly the queue_get_semaphore() and queue_get_mutex() functions do. They return the path of the semaphore and mutex that is contained within $queue. Depending on your coding style they could be one-liners or you could omit them completely, but I encourage you to write them something like the following because it’s more readable and less work if you decide you want to change the name of any of the queue’s members.

Now that we know what’s behind these two functions, we can also write functions that initialize and clean up a queue. The initialization function, queue_init() simply attempts to create a new directory with a semaphore inside.

Likewise, the destructor queue_destroy() attempts to free the queue’s semaphore and then removes the entire queue.

You might argue that the sem_destroy() call is not necessary since the semaphore would be removed by rm -rf anyways, but the call serves another purpose: to make sure that $queue actually points to a valid queue (or a directory that contains a semaphore anyways). It’s not perfect, but it will protect you from havoc in case you accidentally pass your home directory or some other location you probably don’t intend to part with just yet.

The last missing piece in our queue implementation are the two functions that add data to and remove data from the queue. In our implementation, we will create a file called data inside the queue directory and add the data items to this file, one item per line. This way, we can easily access the first item using head and append items to the file using the >> operator.

There is one problem with the above two functions though. Like many things in the shell world, they can’t handle line breaks, so we have to do what we always to when we want to prevent the shell from mangling our data: encode it in base643. The functions need to be tweaked only slightly:

Note the -w 0 argument passed to base64. If you forget this (like I did when I first wrote this function), base64 will insert newlines every 76 bytes of output. D’oh!

The improved queue_take_head() function is even simpler: only the last echo needs to be replaced with base64. However, since base64 may return an error, we need to make sure to handle that.

“That’s nice,” you might think, “but it doesn’t really work without the semaphore functions.” You’re completely right. I meant to explain about semaphores in this post, but it turned out to be a bit longer than I expected, so I’ll leave that for the next time. :-)