When you need a piece of glue-code, a wrapper, or you want to execute a few commands in succession, Shell is the natural choice. However, Shell is almost never chosen for the implementation of larger applications. While there are some good reasons for that, there are also a number of good reasons in favor of shell.

In this series of posts, I am going to show the unexpected marvels that can be built with the shell (and Bash in particular), starting with a simple lock as the basis for increasingly complex IPC mechanisms used to build messaging-based distributed systems. Better yet, all of the code will be highly reusable, testable, and readable.

Why start with a lock?

When you have multiple processes accessing the same file, you need to make sure the file is not read from or written to at exactly the same time. Imagine you have the following code.

If you execute this code twice at exactly the same time, both processes will read the same value from counter, increase it, and write the same value (counter + 1) back to the file. As the result, the counter will be increased by one, even though two processes increased it. This is called a race condition, and locks such as mutexes (mutex = mutual exclusion) solve race conditions by making sure that resources are not accessed in parallel.

It’s not hard to imagine the possible states that a system with two processes and one lock can be in. But adding only one lock makes the system significantly more complicated, introducing problems such as deadlocks (two processes waiting for each other, bringing the system to a halt). That’s why I like to use petri nets to make the problem more tangible.

A petri net is a directed graph with places and transitions that shows the state of a system. Petri nets were invented to model chemical processes, but it turns out they are also a great tool to visualize parallelism.

The code from earlier can be visualized like the following (for two instances).

Petri nets show the state of a system over time, and change whenever one or more transitions fire. A transition fires when there is at least one token in each place that leads towards that transition. For example, these transitions can fire:

The petri net used to visualize the code from the top of this section might fire like this:

If two transitions T0 and T1 are ready to fire, they might do so in any order, including at the same time. So the two tokens above might even proceed at exactly the same time, making the petri net reach its end state at t=2. This unpredictability of the order in which things are going to happen is what makes parallelism so hard.

Coming back to our mutex, what we need is a transition that makes sure only one thread of execution (that is, only one token) can proceed at a time. So what we need is a transition with an extra place that contains a token when we want to allow a token to pass (unlocked state), and does not contain a token when we don’t want any tokens to pass (locked state). 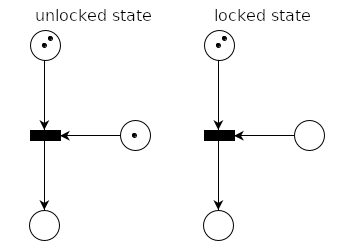 Now the mutex above isn’t very helpful if it can only be used once, so we add the unlock operation (and descriptions), where the token is returned to the mutex’s place. 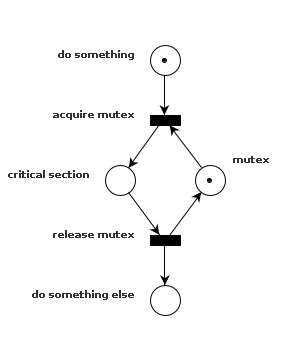 A complete cycle for the mutex with two processes looks like this (the firing transition is shown in red):

How (not) to implement a mutex

Now we know what a mutex looks like, but we still can’t implement one because we’re missing one crucial piece of information: the lock operation must be atomic. That means transitions must complete in a single step. To show why that’s important, let’s assume the lock operation is not atomic.

Because the test whether the mutex is locked and the locking of the mutex are two separate steps, two processes executing the steps simultaneously will both see an unlocked mutex and lock it. We’re running into the very same problem why we needed the mutex in the first place. If the lock and unlock operation aren’t atomic, we will get a race condition accessing the mutex itself. So how do we do it atomically?

We need a way to test and set the lock in a single step. Or in other words, if multiple processes execute the lock operation at exactly the same time, the operation must fail for all but one process. The POSIX standard gives us two commands that meet these criteria: the first is ln (without -f!), the second is mkdir (without -p!). The ln command will create a link and fail if the link already existed. For unlocking, we can use rm - we don’t need to worry about atomicity here. The mkdir command can be used in the same way, but I prefer ln because we can use the link destination to store the process id of the process that created the link.

So what does our lock function look like? Thanks to the need for atomicity, it’s actually even simpler than the broken code above.

Now there is one usability issue with this function: it will not wait until the process has acquired the lock. However, this can be easily achieved by wrapping it in a loop and adding a sleep to avoid busy-waiting.

The unlock operation does not need to be atomic, so we don’t need to be too careful. However, to help us detect bugs, we would like to make sure that only the process that locked the mutex can unlock it. We use the process id stored in the symlink to figure out the owner (I’m using $BASHPID because $$ does not give us the right process id when executed in a subshell).

That’s everything we need to protect a shared resource from race conditions. Now we can implement the counter from the introduction by putting the file access between mutex_lock() and mutex_unlock() calls like so.

Because mutex_lock() will put the process to sleep until the mutex was acquired, we can be sure that the mutex is ours when the call returns. This seemingly makes it very easy to avoid race conditions - and for small things like the counter above it really is. But as already hinted above, once you start implementing things where you need to acquire multiple mutexes at a time, things quickly become very complicated. That’s when we will use petri nets to ensure that our implementations are deadlock-free.

Another problem with mutexes is that, if one process has locked the mutex, all other processes will be forced to wait until the mutex is unlocked. Therefore, avoid doing things in your critical sections that might as well be done outside of them. And absolutely avoid return or exit statements in critical sections. You’re setting yourself up for disaster (and hours of debugging) if you have code paths that leave locked mutexes behind.

When in doubt, petri nets are your friends. The next time, we will use them to model and implement semaphores, another primitive for synchronization.